The 1759 earthquake in the Bekaa valley: Implications for earthquake hazard assessment in the eastern Mediterranean region 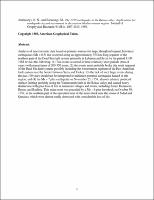 Analysis of macroseismic data based on primary sources for large, though infrequent, historical earthquakes (Ms > 6.5) that occurred along an approximately 350-km-long segment of the northern part of the Dead Sea fault system primarily in Lebanon and Syria for the period 1100-1988 reveals the following: (1) Ten events occurred in three relatively short periods (tens of years) with repeat times of 200-350 years; (2) the events most probably broke this north segment of the Dead Sea fault system, possibly including the westernmost segment of the East Anatolian fault system near the border between Syria and Turkey; (3) the lack of such large events during the past 100 years should not be interpreted to minimize potential earthquake hazard in this region; and (4) the Ms ~ 7 plus earthquake on November 25, 1759, almost certainly produced surface faulting probably along the Yammouneh fault in the Bekaa valley and caused heavy destruction with great loss of life in numerous villages and towns, including Safad, Damascus, Beirut, and Baalbek. This main event was preceded by a Ms ~ 6 plus foreshock on October 30, 1759, in the southern part of the epicentral area of the main shock near the towns of Safad and Qunaitra, which were almost totally destroyed with considerable loss of life.