The Dust Belts of Mars 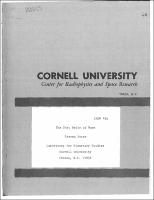 From the unrelated facts that Mars is subjected to a flux of asteroidal projectiles and that it has two very small satellites, an elementary analysis leads to the proposition that the planet possesses an orbiting dust belt system, previously unsuspected. Furthermore the satellites themselves should have surfaces resembling that of the Moon. Factors bearing on the evolution of an orbiting debris system are discussed, leading to some speculations concerning the origin and structure of the rings of Saturn.