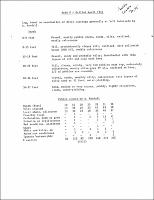 Wells on the Harford Teaching and Research Center, College of Agriculture and life Sciences. Installation, measuring point (mp), depth and elevation of monitoring wells Several monitoring wells were installed under the supervision of the USGS (mostly by Allan Randall in the mid 1970s). Basically a casing was sunk, a 2 inch plastic pipe with a screen at the lower end was installed. The casing was gradually pulled partially and the annular ring between casing and plastic pipe was sealed with clay pellets. Some times a second pipe was installed above this seal, more of the casing was pulled, another seal of clay was installed and finally a heavy duty cast iron pipe was placed around the upper 2- 3 foot of the exposed plastic pipe as protection. Also a locked cap was placed on top of the protective pipe. The elevation of the top of the plastic pipes was determined relative to a known elevation; this elevation is known as the ?measuring point?.(called the mp). The depth to water is measured by lowering a sensor which rings when the water surface is reached and this depth relative to the mp is recorded as ?depth? in the date files. The elevation of the water surface is recorded as the difference between the mp and depth and this is referred to as ?elevation? in the data files. The depth of the wells is usually expressed as depth from the surface and hence is not as accurate as the mp. Usually the mp is 2.5 to 3 feet above the surface. Additional shallow wells were installed by CALS personnel as follows. A pit was dug by a back hoe, an 1.5 inch diameter rod was driven into botton of the pit to make a cavity for insertion of a 1 inch diameter plastic pipe fitted with about a 1 foot length of screen inserted into this hole, the void between the hole and sampling pipe was filled with sand and a clay seal placed above this and finally the hole was refilled with original material and packed back to original density. Well logs Attached are well logs of some of the wells. These logs are invaluable in analyzing the substrate and likely compartmentalizing the aquifers.

These records supplement David Bouldin's data on water quality for samples collected from these wells.