The New Kaleidoscope of Scholarly Communication 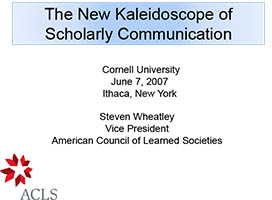 Presentation and recording of a talk given by Steven Wheatley, Vice President of the American Council of Learned Societies, at the June 7, 2007, Cornell University Library Academic Assembly about the role that scholarly communication plays in our society as it relates to electronic and print materials.

Excerpt of talk: "A fairly stable system of scholarly communication -- with defined roles for libraries, university presses and scholarly societies -- arose along with the modern American university. Digitization is only the most prominent force stressing that system and altering the interaction of its components. To make sense of this shifting kaleidoscope we need to think again on the missions of the several actors."