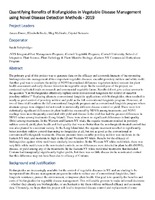 The primary goal of this project was to generate data on the efficacy and economic impacts of incorporating biofungicides into management of two important vegetable diseases: cucurbit powdery mildew and white mold. Another goal was to evaluate the utility of NDVI (normalized difference vegetation index) sensors for plant health assessment and early disease detection in vegetable crops. In the second year of the project, we conducted replicated trials on research and commercial vegetable farms. Results did not give a clear answer to the question “Can biofungicides effectively replace some conventional fungicides for control of cucurbit powdery mildew?” Replacing alternate conventional fungicide applications with biofungicides often resulted in nearly as good control of powdery mildew and yield as the full conventional fungicide program. However, at two of three trial locations the full conventional fungicide program and a conventional fungicide program where alternate sprays were skipped did not result in statistically different disease control or yield. There were few statistically significant differences in plant health (as measured by NDVI) among treatments, and NDVI readings were most frequently correlated with yield and disease in the trial that had the greatest differences in NDVI values among treatments (Long Island). There were almost no significant differences in fruit quality (Brix) among treatments. In the Western and Eastern NY trials, the organic treatment resulted in powdery mildew control, yield, plant health and fruit quality that was no better than the non-fungicide-treated control that was also planted to a resistant variety. In the Long Island trial, the organic treatment resulted in significantly better powdery mildew control than using no fungicides at all, but not as good as the conventional or conventional/biofungicide treatments. Disease pressure from cucurbit powdery mildew was moderate in the Eastern NY trial, and moderate to high in the LI and Western NY trials. Results for the efficacy of biofungicides against white mold were similarly inconclusive. In the Western NY white mold trials, there was very little white mold even in the non-treated controls, so no differences were detected in plant health (NDVI), disease, or yield among any of the treatments. In the Eastern NY white mold trial treatments that included Contans had (marginally) significantly higher yields, but there was so little disease in the non-treated control that this difference may not have been due to efficacy of Contans.