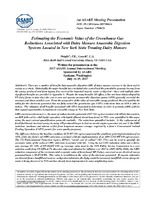 There are a number of benefits that anaerobic digestion (AD) of dairy manure conveys to the farm and to society as a whole. Historically, the major benefits have included odor control and the potential to generate income from the energy produced and from tipping fees received for imported organic waste co-digested – these and multiple other significant benefits are provided in Appendix A. Despite the many benefits AD offers, it has not been widely adopted by US dairy farms to date since the cost to own and operate an anaerobic digestion system (ADS) generally exceeded the revenues and direct avoided costs. From the perspective of the value of renewable energy produced, the price paid by the utility for the electricity generated has not fully valued the greenhouse gas (GHG) reductions that an ADS is able to deliver. The valuation of all benefits associated with AD is important to determine, in order to promote public policies that expand opportunities to implement renewable energy in New York State. GHG emission reductions (i.e., the mass of carbon dioxide equivalents [MT CO2 eq.]) associated with AD (in this analysis, an ADS followed by solid-liquid separation with liquid effluent stored long-term) in NYS, were quantified in this paper using the most current quantification protocols available. The reductions quantified include: 1) the replacement of fossil fuel-based electrical energy by using AD produced biogas to fuel an on-site engine-generator set, and 2) the GHG emissions (methane and nitrous oxide) from long-term manure storages required by a farm’s Concentrated Animal Feeding Operation (CAFO) permit (for water quality purposes). The difference between the baseline condition (4.58 MT CO2 eq/cow-year) and the conditions post-implementation of an ADS, yields the farm’s net GHG emissions associated with the implementation of an ADS (2.94 MT CO2 eq/cow-year). The US Environmental Protection Agency (EPA)’s “social cost of carbon” (SC- CO2) can be used to quantify the economic value of the reduced GHG emissions associated with AD. Using the net GHG reduction value and a threeyear average SC- CO2 of $47.82/MT CO2 eq. (average value used by the NYS Public Service Commission in a zero emission credit from US EPA at 3% discount value and adjusted for inflation over 2017 to 2019) (EPA, 2016), the GHG reduction component of the environmental economic value of farm-based AD (Eghg), expressed on an electrical energy generated basis is $0.072/kWh. This value is in addition to the value of the electrons generated. If organic substrates are diverted from a landfill and used as co-digestion substrates, the Eghg would be increased; landfill diversion of organic waste is being discussed in NYS and has already been implemented in some neighboring states.