Sparse Cholesky Factorization on a Multiprocessor 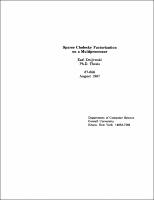 Systems of linear equations of the form $Ax = b,$ where $A$ is a large sparse symmetric positive definite matrix, arise frequently in science and engineering. The sequential computation of the solution vector $x$ is well understood and many algorithms for this problem employ the following steps. First, try to reorder the rows and columns of $A$ so that its Cholesky factor $L$ is sparse. Next, determine the structure of $L$ by symbolically factoring $A$ and allocate storage for $L$. Finally, numerically factor $A$ and then compute $x$ by solving the triangular systems $Ly=b$ and $L^{T}x=y$. In this thesis, we present parallel algorithms for the different steps of this computation. We design our algorithms for message-passing multiprocessors. The algorithms limit communication overhead and can solve problems that are too large to reside in the memory of any single processor. We provide numerical results based upon an implementation on an Intel hypercube. We begin by presenting a parallel column-oriented sparse numeric Cholesky factorization algorithm. Then, viewing $A$ as a graph, we develop a parallel graph partitioning algorithm that we use to order the columns of $A$ and partition them among the processors. In addition to producing a sparse $L$, the resulting ordering and partitioning allows for parallelism and reduces communication overhead during the remaining phases of the computation. The parallel graph partitioning algorithm is based on the sequential Kernighan-Lin algorithm for finding small edge separators. Since the computation of a particular column of $L$ may depend on columns stored on several processors, the processors cannot operate independently. The elimination forest of $A$ captures these dependencies and allows for efficient numeric factorization. We provide a parallel algorithm for computing the forest and prove its correctness. We also develop a parallel row-oriented symbolic factorization algorithm that uses the elimination forest. Finally, we describe fast parallel forward and backward triangular solve algorithms. These algorithms solve for the components of $x$ requiring information from other processors by using a variant of Li and Coleman's dense triangular solve algorithms.