The Magnitude and Distribution of Western Bean Cutworm, and the Risk to Dry Beans 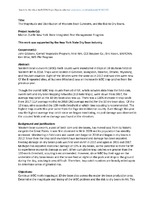 Western bean cutworm (WBC) moth counts were monitored in traps at 10 dry bean fields in Western NY in 2018. Traps were located in Genesee, Livingston, Monroe, Ontario, Wyoming, and Steuben counties. Eight of the 10 sites were the same as in 2017 and two sites were new. Of the 8 repeated sites, all but one (Wayland) saw an increase in WBC trap catches from the previous year. Though the overall WBC trap counts from all of NY, which includes data from the field corn, sweet corn and dry bean trapping networks (118 total traps), were down from 2017, the average trap catch at the 10 dry bean sites was up. There was a 130% increase in trap catch from 2017 (114 average moths) to 2018 (262 average moths) for the 10 dry bean sites. Of the 10 traps, nine exceeded the 100-moth threshold at which time scouting is recommended. The highest trap counts this year came from the Riga site in Monroe county. Even though this year saw the highest average trap catch since we began monitoring, no pod damage was observed in the scouted fields and no damage was found at the elevators.