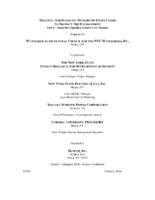 The Anaerobic Fixed Film Digester (FIXED-FILM AD) system was intended to control odors, reduce pathogens, produce methane for digester heating and drying solids, and produce manure solids for bedding and soil amendment. Conventional anaerobic digesters used for treating animal waste are generally built for an HRT (hydraulic retention time) of 21 days. One reason for this retention time is to give the bacteria time to multiply, seeing that every time a digester is fed (influent) an equal volume is discharged (effluent). There is a high concentration of bacteria in the effluent and these bacteria are lost. Recent designs of digesters have utilized the fact that bacteria cling to surfaces within the digester and by increasing the area in the digester (fixed film) the bacteria population is increased. As a result, the bacteria lost in the effluent are a much lower percentage of the total population in the digester. The bacteria are retained within the digester on the fixed film media. As a result, the hydraulic retention time can be reduced. A digester with this increased surface area is termed a fixed film digester.