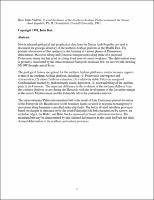 Newly released geological and geophysical data from the Syrian Arab Republic are used to document the geological history of the northern Arabian platform in the Middle East. The primary observation of this synthesis is the focusing of various phases of Phanerozoic deformation (Mesozoic rifting and Cenozoic transpression) along strike of a proposed Proterozoic suture that has acted as a long-lived zone of crustal weakness. This deformation zone is presently manifested by the intracontinental Palmyride mountain belt, an inverted rift, trending NE-SW through central Syria. The geological history recognized for the northern Arabian platform is similar in many respects to that of the southern Arabian platform, including: (1) Proterozoic convergence and cratonization, (2) minor Cambrian extension, (3) a relatively stable Paleozoic margin of Gondwanaland marked by predominantly clastic deposition, (4) eastward tilting of the Arabian plate in the Cenozoic. The important difference in the evolution of the northern platform from the southern platform occurs during the Mesozoic with the development of the Levantine margin in the eastern Mediterranean and the Palmyride rift in the continental interior. The intracontinental Palmyride mountain belt is the result of Late Cretaceous-present inversion of the Palmyride rift. Reactivation of rift boundary faults occurred in response to transpressive movement along basement-controlled strike-slip faults. The belt is divided into three provinces based on changes in structural style: the south Palmyride fold belt characterized by narrow, en enchelon ridges, the Bishri, and Bilas blocks expressed as broad, antiformal structures. The mountain belt may be characterized by thin-skinned deformation in the south fold belt and thick-skinned deformation in the northern and eastern provinces.