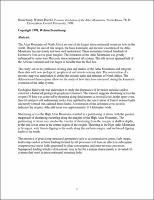 The Atlas Mountains of North Africa are one of the largest intracontinental mountain belts in the world. Despite the size of this orogen, the basic kinematic and tectonic evolution of the Atlas Mountains has previously not been well understood. These mountains formed hundreds of kilometers from active plate margins. The formation of the Atlas Mountains was greatly influenced by a previous Mesozoic intracontinental rift system. This rift system spanned half of the African continent and was larger in breadth than the Red Sea. This study set out to synthesize existing data and studies of the Atlas Mountains and integrate these data with new geological, geophysical and remote sensing data. The construction of a tectonic map was undertaken to define the tectonic units and terraines of North Africa. The delineation of these regions allow for the study of how they have interacted during the kinematic evolution of the Atlas system. Geological field work was undertaken to study the kinematics of inversion tectonics and to construct a balanced geological-geophysical transect. The transect suggests shortening across the orogen (36 km) was achieved by thrusting along detachments at several levels in the upper crust. Syn-rift and post-rift sedimentary rocks were uplifted by the reactivation of Synrift normal faults and newly formed thin-skinned thrust faults. A restoration of the deformed cross section indicates the original Atlas rift basin was approximately 113 kilometers wide. Shortening across the High Atlas Mountains resulted in a partitioning of strain, with the greatest magnitude of shortening occurring along the margins of the High Atlas Mountains. The partitioning of strain may involve the transfer of shortening from the margins at shallow depths, to the mid-lower crust in the central region of the orogen. Thrusting in the High Atlas Mountains is bivergent, with thrusts dipping to the south along the northern margin, and northward dipping faults to the south. The presence of preexisting structural geometries such as accommodation zones, fault ramps, fault relays and en echelon faulting formed by rift processes will have an effect on subsequent compressional stress fields generated by plate convergence and other tectonic processes. Superposed folding which is disharmonic may in fact be a unique characteristic to inverted rift systems that result in intracontinental mountain belts.