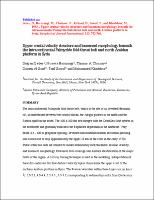 The intracontinental Palmyride fold-thrust belt, which is the site of an inverted Mesozoic rift, is sandwiched between two crustal blocks, the Aleppo plateau in the north and the Rutbah uplift in the south. The 400 x 100 km belt merges with the Dead Sea fault system in the southwest and gradually ends near the Euphrates depression in the northeast. Very dense (i.e., 100 m geophone spacing), reversed and multifold seismic refraction profiling was carried out to map approximately the upper 15 km of the crust in the early 1970s. These refraction data are utilized to model sedimentary rock thickness, seismic velocity, and basement morphology. Extensive data coverage also enables identification of the major faults of the region. A 2-D ray tracing technique is used in the modeling. Interpretation of these data indicates that five distinct velocity layers characterize the upper crust of the northern Arabian platform in Syria. The P-wave velocities within these layers are (in km s-1): 2.0-2.8, 4.0-4.4, 5.2-5.3 , 5.5-5.7, corresponding to sedimentary rocks from Quaternary to late Precambrian in age, and 5.9-6.0, corresponding to metamorphic basement. A comparison of the velocity models with the available drill hole information and seismic reflection profiles shows strong velocity variations in a given geologic formation, depending on the depth and location of the formation. The depth to metamorphic basement beneath the Palmyride fold belt clearly shows a deep trough, filled with Phanerozoic sedimentary rocks. These rocks decrease in thickness from about 11 km in the southwest to about 9 km in the central segment of the belt. The basement depth is about 6 km in the Aleppo plateau and not less than 8 km in the Rutbah uplift. Deeper basement in the Rutbah uplift is probably the result of a Precambrian rifting episode, clearly identified to the south in Jordan and Saudi Arabia. Cenozoic crustal shortening of about 20-25% across the southwestern segment of the Palmyride belt has not been sufficient to substantially reduce the size of the basement trough beneath this mountain belt. Finally, northeast decreasing basement depth in the Palmyrides supports the idea that the Palmyride Mesozoic rifting was developed as an aulacogen of the rifted Levantine margin along the eastern Mediterranean.