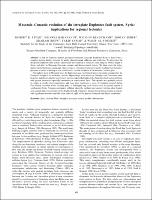 A lack of dramatic surface geologic structures along the Euphrates River in Syria belie a complex tectonic history revealed by newly-released seismic reflection and well data. We document the intraplate Euphrates fault system, characterize the variation in structural style along its 350 km length in Syria, and infer its Mesozoic-Cenozoic tectonic and deformational history. We then relate the deformation of the Euphrates system and other proximate intraplate structures to nearby Arabian plate boundary processes in order to develop a new model for the kinematic evolution of the northern Arabian plate. Throughout most of Mesozoic time, the Euphrates area experienced minor deposition compared to the Palmyride trough to its southwest, and the Sinjar trough to its northeast. During latest Cretaceous time, however, significant sinistral transtension occurred along the length of the Euphrates fault system in Syria, with graben formation especially noteworthy in southeastern Syria. This episode was probably related to events at nearby plate boundaries, and may have reactivated a zone of weakness formed during Pan-African accretion of the Arabian plate. A Paleogene sag basin formed over the graben system in southeastern Syria. Neogene continental collision along the northern and eastern Arabian plate boundaries precipitated minor reactivation of the Euphrates fault system in a dextral transpressional sense, in concert with significant inversion and the main phase of uplift of the nearby Palmyride and Sinjar mountains.

This material has been published in Journal of the Geological Society, London, 154, 653-666, 1997, the only definitive repository of the content that has been certified and accepted after peer review. Copyright and all rights therein are retained by The Geological Society of London. See also: http://www.geolsoc.org.uk/template.cfm?name=Journals_JGS_home_page; http://atlas.geo.cornell.edu/syria/litak_gsl_1997.html

The Geological Society of London