Tectonic evolution of the northern Arabian plate in western Syria 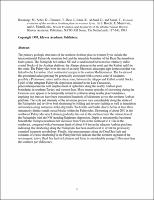 The primary geologic structures of the northern Arabian plate in western Syria include the intracontinental Palmyride mountain belt and the interplate boundary of the Dead Sea transform fault system. The Palmyride belt strikes NE and is sandwiched between two relatively stable crustal blocks of the Arabian platform: the Aleppo plateau in the north and the Rutbah uplift in the south. The Palmyrides were the site of an early Mesozoic aulacogen-type depression that was linked to the Levantine rifted continental margin in the eastern Mediterranean. The location of this postulated aulacogen may be genetically associated with a crustal zone of weakness, possibly a Proterozoic suture and/or shear zone, between the Aleppo and Rutbah crustal blocks. Uplift of the intraplate Palmyride depression initiated in the Late Cretaceous, penecontemporaneous with emplacement of ophiolites along the nearby Arabian plate boundaries in southern Turkey and western Iran. More intense episodes of shortening during the Cenozoic also appear to be temporally related to collision along nearby plate boundaries, implying that stresses have been transmitted hundreds of kilometers across the northern Arabian platform. The style and intensity of the inversion process vary considerably along the strike of the Palmyrides and involves both shortening by folding and reverse faulting as well as translation and rotation along numerous strike-slip faults. Such folds and faults clearly define at least three structurally distinct small crustal blocks within the Palmyrides. Shortening of about 20% in the southwest Palmyrides near Lebanon gradually dies out to the northeast near the intersection of the Palmyrides with the NW-trending Euphrates depression. Depth to metamorphic basement beneath the Palmyra mountain belt increases from 9 km in the northeast to 11 km in the southwest, compared with a basement depth of about 6-8 km in the adjacent Arabian platform, indicating that shortening along the Palmyrides has been insufficient to invert the previously extended basement morphology. Finally, slip measurements along the Dead Sea fault and estimates of crustal shortening in the Palmyride belt indicate that the northern segment of the seismogenic active Dead Sea fault in Lebanon and Syria is considerably younger (Pliocene) than the southern part (Miocene).