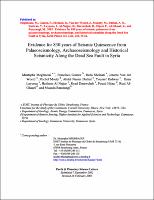 The long historical record of earthquakes, the physical effects on ancient building structures and the palaeoseismology provide a unique opportunity for an interdisciplinary tectonic analysis along a major plate boundary and a realistic evaluation of the seismic hazard assessment in the Middle East. We demonstrate with microtopographic surveys and trenching that the Dead Sea fault (DSF) offsets left-laterally by 13.690.2 m a repeatedly fractured ancient Roman aqueduct (older than AD 70 and younger than AD 30). Carbon-14 dating of faulted young alluvial deposits documents the occurrence of three large earthquakes in the past 2000 years between AD 100 and 750, between AD 700 and 1030 and between AD 990 and 1210. Our study provides the timing of late Holocene earthquakes and constrains the 6.990.1 mm/yr slip rate of the Dead Sea transform fault in northwestern Syria along the Missyaf segment. The antepenultimate and most recent faulting events may be correlated with the AD 115 and AD 1170 large earthquakes for which we estimate Mw =7.3^7.5. The 830 yr of seismic quiescence along the Missyaf fault segment implies that a large earthquake is overdue and may result in a major catastrophe to the population centres of Syria and Lebanon.

An edited version of this paper was published in Earth and Planetary Science Letters by Elsevier Science. Elsevier Science retains the copyright to this paper (Copyright 2003). See also: http:\\dx.doi.org\10.1016\S0012-821X(03)00144-4; http://atlas.geo.cornell.edu/deadsea/publications/Meghraoui2003_EPSL.htm