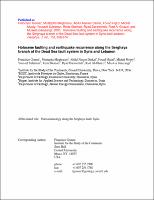 The Serghaya fault, located approximately along the Syrian-Lebanese border, is a prominent structure within the 200 km restraining bend in the left-lateral Dead Sea fault system. This study documents palaeoseismic and geomorphic expressions of Holocene movements on the Serghaya fault based on trench excavations and radiocarbon dates. Trenches were excavated across and parallel to a 4.5 m fault scarp where Late Pleistocene sediments are faulted against Holocene alluvium and colluvium. Locally oblique slip on the Serghaya fault has produced a sequence of fault-derived colluvial wedges that distinguishes individual palaeoseismic events. In addition, the trench excavations also depict a sequence of buried and displaced channels. Our palaeoseismic study reveals evidence for five surface-rupturing events within the past ~6500 yr. The last event involved 2-2.5 m of primarily left-lateral displacement and may correspond to one of two historically documented earthquakes during the 18th century (in 1705 and 1759). The displaced channels provide an estimated slip rate of approximately 1.4 - 0.2 mm yr-1 during the Holocene. The chronological relationships between the colluvial wedges and faulted channels demonstrate an average left-lateral displacement of about 2 m per event, suggesting that such events correspond to earthquakes of M >~ 7 with a mean return time of about 1300 yr. These results demonstrate that the Serghaya fault may present a previously overlooked earthquake hazard for populations in the vicinity of the AntiLebanon Mountains, including the cities of Damascus and Beirut. In a regional context, the inferred slip rate along the Serghaya fault accounts for about 25 per cent of the total expected motion of Arabia relative to Africa along the Dead Sea fault system. The fact that the Serghaya fault accounts for only a fraction of the expected plate motion implies that the remaining strike-slip and shortening must be accommodated by other active fault branches within the large restraining bend of the Dead Sea fault system. These results contradict suggestions that the northern Dead Sea fault system in Lebanon and Syria is presently inactive as a result of an evolving regional stress field in the eastern Mediterranean region.