Structure and tectonic development of the Ghab Basin and the Dead Sea Fault System, Syria 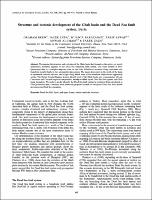 We examine the structure and evolution of the Ghab basin that formed on the active, yet poorly understood, northern segment of the Dead Sea transform fault system. The basin formed in the Plio-Quaternary time at a complex step-over zone on the fault. Subsidence occurred along cross-basin and transform-parallel faults in two asymmetric depocentres. The larger depocentre in the south of the basin is asymmetric towards the east, the margin along which most active transform displacement apparently occurs. The Syrian Coastal Ranges, located directly west of the Ghab basin, are a consequence of Late Cretaceous and Cenozoic regional compression, heavily modified by the Dead Sea fault system and Ghab basin formation. We prefer a model whereby the Dead Sea fault system in northwest Syria developed in Plio-Quaternary time, consistent with previously proposed models of two-phase Dead Sea fault system movement and Red Sea spreading.