Crustal structure of the Arabian Plate: New constraints from the analysis of teleseismic receiver functions 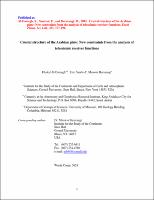 Receiver functions for numerous teleseismic earthquakes recorded at 23 broadband and mid-band stations in Saudi Arabia and Jordan were analyzed to map crustal thickness within and around the Arabian plate. We used spectral division as well as time domain deconvolution to compute the individual receiver functions and receiver function stacks. The receiver functions were then stacked using the slant stacking approach to estimate Moho depths and Vp/Vs for each station. The errors in the slant stacking were estimated using a bootstrap re-sampling technique. We also employed a grid search waveform modeling technique to estimate the crustal velocity structure for seven stations. A jackknife re-sampling approach was used to estimate errors in the grid search results for three stations. In addition to our results, we have also included published receiver function results from two temporary networks in the Arabian shield and Oman as well as three permanent GSN stations in the region. The average crustal thickness of the late Proterozoic Arabian shield is 39 km. The crust thins to about 23 km along the Red Sea coast and to about 25 km along the margin of the Gulf of Aqaba. In the northern part of the Arabian platform, the crust varies from 33 to 37 km thick. However, the crust is thicker (41?53 km) in the southeastern part of the platform. There is a dramatic change in crustal thickness between the topographic escarpment of the Arabian shield and the shorelines of the Red Sea. We compared our results in the Arabian shield to nine other Proterozoic and Archean shields that include reasonably well determined Moho depths, mostly based on receiver functions. The average crustal thickness for all shields is 39 km, while the average for Proterozoic shields is 40 km, and the average for Archean shields is 38 km. We found the crustal thickness of Proterozoic shields to vary between 33 and 44 km, while Archean shields vary between 32 and 47 km. Overall, we do not observe a significant difference between Proterozoic and Archean crustal thickness. We observed a dramatic change in crustal thickness along the Red Sea margin that occurs over a very short distance. We projected our results over a cross-section extending from the Red Sea ridge to the shield escarpment and contrasted it with a typical Atlantic margin. The transition from oceanic to continental crust of the Red Sea margin occurs over a distance of about 250 km, while the transition along a typical portion of the western Atlantic margin occurs at a distance of about 450 km. This important new observation highlights the abruptness of the breakup of Arabia. We argue that a preexisting zone of weakness coupled with anomalously hot upper mantle could have initiated and expedited the breakup.