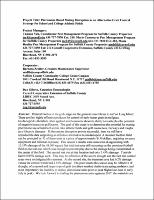 Oriental beetles in the grub stage are the greatest insect threat to turf on Long Island. There are few highly effective products for control of early instar grubs in turfgrass. Imidacloprid is therefore often applied amid concerns about its ability to leach plus the potential of negative impact on pollinators. The goal of this study is to determine the potential for mating pheromone use around turf at risk, like athletic fields and golf course tees, fairways and roughs as a lifecycle disruptor. If pheromone disruption proves successful, then we will have reproducible data supporting an effective alternative to imidacloprid. A standard football field can be protected by 53 of these units at a price of approximately $150 dollars, requiring no spray equipment and minimal exposure. This season’s results were somewhat disappointing with 16.35% damage of the 48,000 square feet total test area still occurring on the premium football field at one test site, which was enough to prevent play due to the damage being concentrated in the center of the field. The second test site at that location had only 5.45% damage. Controls had 0.0015% damage each. This may be reflective of the severe drought and the fact that control areas were not irrigated this summer. At the second site, the treatment area had 6.2% damage versus the control which had 2.65% damage. The poor results this season may be reflective of drought, of a second and larger type of grub (northern masked chafers) attracting predators, and most importantly the inability to deploy pheromone units prior to peak flight (late June to early July is peak). We look forward to trialing the pheromone units again in 2017; the materials are in hand and in cold storage and we suspect that proper timing (and hopefully less drought interference) will make a larger impact on populations.