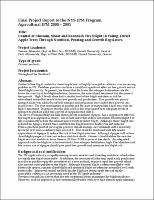 Control of fire blight control on dwarf apple trees of highly-susceptible cultivars is an increasing problem in NY. Fertilizer practices can have a small but significant effect on tree growth and on shoot blight severity. In general, we found that the lower the nitrogen fertilization rate the lower the severity of fire blight infection; however, the unfertilized treatment had the poorest tree growth. High K levels alone had a similar level of fire blight infection as did the unfertilized control but much better tree growth and production. Tree growth was poor if nitrogen alone was added but if both nitrogen and potassium were added then growth was much better. The best combination of growth and the least severity of fire blight was with the high K treatment. It appears that the soils used in this experiment have adequate levels of nitrogen to produce good tree growth if supplemented with K.