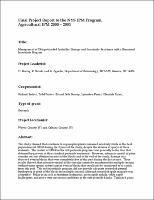 This study showed that resistance to organophosphates remained relatively stable in the field populations of OBLR during the 3 years of the study, despite the absence of sprays of these materials. The control of OBLR in the soft pesticide programs was generally better than that obtained by growers in their standard pesticide treatments. However, adequate control of plum curculio was not obtained in most of the blocks and at the end of the study, damage was observed even in blocks that were completely free of this pest during the first season. These results showed that adequate control of the curculio cannot be maintained for multiple seasons without using special control sprays even in blocks that would not be considered to be at risk from this pest. This soft insecticide program did not provide adequate control of internal lepidoptera in some of the blocks for multiple seasons, although control of apple maggots was acceptable. Foliar pests such as tentiform leafminers, green apple aphids, white apple leafhoppers, and mites were not serious problems in the soft pesticide blocks. Tarnished plant bug damage was generally similar in grower's standard programs and the soft pesticide blocks. Secondary pests, such as rosy apple aphids and the San Jose Scale were problems in some of the soft pesticide blocks. However, the overall insect damage in the standard and soft pesticide was fairly similar during all seasons of the 3 year study, except in one orchard, which suffered severe damage from curculio and internal lepidoptera. The costs of insecticides applied in the standard and soft pesticide programs were fairly similar.