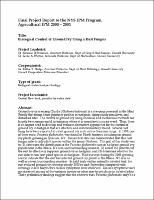 Ground ivy or creeping Charlie (Glechoma hederacea) is a creeping perennial in the Mint Family that forms dense prostrate patches in turfgrass, damp shady meadows, and disturbed sites. The control of ground ivy using chemical and mechanical methods has largely been unsuccessful in turfgrass where it is considered a major weed. Thus, there is an urgent need to develop and evaluate alternative approaches for the control of ground ivy in turfgrass that are effective and environmentally sound. Several rust fungi have been reported to infect ground ivy in its native Eurasian range. In 1998, one of these rusts, Puccinia glechomatis, was found in North America including on ground ivy plants growing in Syracuse, NY. Research to date has demonstrated that this rust fungus infects only plant species within the genus Glechoma. The goal of this study was to (1) determine the distribution of the Puccinia glechomatis rust on turfgrass ground ivy populations in the Ithaca, NY area and surrounding counties, (2) assess the potential of the rust to effectively suppress ground ivy in turfgrass, and (3) determine whether the rust infects non-host plant species in turfgrass.