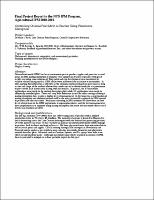 Oriental fruit moth (OFM) has been an economic pest in peaches, apples and pears for several years. In 2000, mating disruption techniques were applied in 80 acres of peaches with good results, requiring some refinement. Trap catch and egg development were monitored to validate control timing models. OFM adults were monitored for resistance to insecticides. In 2001, mating disruption was as effective as the chemical control orchards in most cases as long as size and shape of the orchard allowed for a wide area to be flooded with the sex pheromone to prevent the male moths from mating with the females. In general, the 4-5 insecticide applications were made in the mating disruption plots while 8-9 applications were made in chemically controlled plots. There was very little difference in cost for either strategy although mating disruption does require a higher level of management. In the long run, a combination of mating disruption and chemical controls will be the most sustainable approach to OFM control in peaches and other tree fruit. Resistance screening in 2001 continues to show there are low levels of resistance in the OFM populations to organophosphates, and the best management of these populations is to continue using mating disruption and rotate the insecticide classes used between generations of OFM.