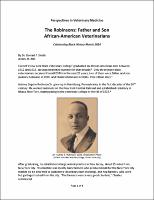 Cornell’s New York State Veterinary College graduated six African-American men between 1912 and 1918, an unprecedented number for that decade. Only three more black veterinarians received Cornell DVMs in the next 25 years. This is the story of two of them who were father and son (Aubrey Robinson in 1920, and Charles Robinson in 1944).