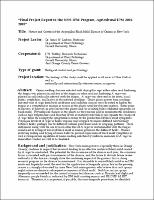 Onion seedlings became infected with Aspergillus niger either when seed harboring the fungus was planted in soil free of the fungus or when seed not harboring A. niger was planted in soil artificially infested with the fungus. A. niger was detected in the roots, basal plates, cotyledons, and leaves of the infected seedlings. Onion plants grown from seedlings infected with A. niger from both seedborne and soilborne sources were detected to harbor the fungus in a symptomless manner in tissues of the plants until they became mature. Either prior to harvest, at harvest, or after harvest the plants and/or resulting bulbs exhibited symptoms of black mold. Physiological changes in the plants as they mature and or environmental conditions such as high temperatures and moisture levels at maturity most likely can regulate the change of A. niger from the endophytic symptomless nature to the production of black mold symptoms.