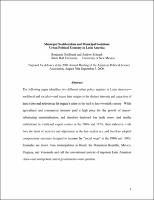 Identifies two different urban policy regimes in Latin America—neoliberal and socialist—and traces their origins to the distinct interests and capacities of local elites and activists in the region’s cities in the mid-to-late twentieth century. While agricultural and commercial interests paid a high price for the growth of import-substituting industrialization, and therefore deployed free trade zones (and similar institutions) in traditional export centers in the 1960s and 1970s, their industrial rivals bore the brunt of austerity and adjustment in the free market era, and therefore adopted compensatory measures designed to increase the “social wage” in the 1980s and 1990s. Examples are drawn from municipalities in Brazil, the Dominican Republic, Mexico, Uruguay, and Venezuela and call the conventional portrait of impotent Latin American cities—and omnipotent central governments—into question.

Prepared for delivery at the 2006 Annual Meeting of the American Political Science Association, August 30th - September 3, 2006.