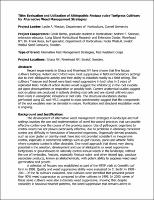 Recent experiments in Ithaca and Riverhead NY have shown that fine fescue cultivars Intrigue, Reliant, and Oxford were most suppressive in field and laboratory settings due to their allelopathic activity and their ability to establish readily in a field setting. The cultivars Treasure and Boreal were least weed suppressive in both sites in 2 years of replicated trials. Mode of action studies would suggest the inhibitor(s) in the root exudate act upon photosynthesis or respiration or possibly both. Current anatomical studies suggest root exudates are produced in actively dividing root cells and are stored until extrusion from roots in osmiophilic inclusions in root cells. The structural elucidation studies performed using GC and HPLC coupled to mass spectrometry suggest that the components of the root exudates may be steroidal in nature. Purification and structural elucidation work is ongoing.