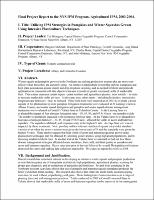 Winter squash and pumpkin growers in the Northeast are seeking production systems that are more costeffective than those they are currently using. An intensive plasticulture system that utilizes transplants and high plant populations, plastic mulch and drip irrigation, scouting, and as-needed fertilizer and pesticide applications is consistent with this objective because it results in greatly increased yields of marketable fruit. This system increases certain inputs – plant numbers and agricultural plastics, most notably – in order to increase marketable yields per acre. At the same time, other inputs – including herbicides, insecticides, fungicides and fertilizers – may be reduced. Three field trials were undertaken in 2003 to evaluate various aspects of the plasticulture system: pumpkin fertigation treatments were evaluated at Al Lansing’s farm in Albany County, and winter squash fertigation and pumpkin and winter squash disease management treatments were evaluated at Cornell’s Valatie farm in Columbia County. At the Lansing farm we evaluated the impact of four nitrogen fertigation rates – 50, 65, 80, and 95 lb N/acre - on pumpkin yields. The number of pumpkins increased with increasing fertilizer rates. At the Valatie farm we evaluated how four rates of nitrogen fertilizer – 30, 45, 60 and 75 lb N/acre - affected the yields of acorn and butternut squashes. The squashes exhibited yield responses only at the highest N rate. Average fruit size was not impacted by these treatments. New, powdery mildew tolerant varieties of squash out-yielded standard varieties even when the newer varieties were given the lowest rates of N and the standards were given the highest N rates. These studies suggest that high yields of acorn and butternut squashes grown using plasticulture techniques may be obtained by selecting good varieties, using high plant populations, and by choosing modest fertilizer rates. In another trial at the Valatie farm we intended to find out how three disease management strategies affected disease incidence, fruit yield, and fruit quality in pumpkins and acorn and butternut squashes. Heavy rains just prior to harvest followed by a rapid Phytophthora infestation destroyed the entire trial making data collection impossible. We expect to repeat this work in 2004.