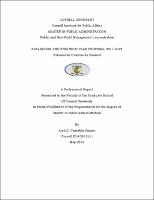 Tribunal de Cuentas de Panamá is a government agency within the Panamanian Judiciary charged with hearing cases in which administrative officials in the Panamanian government have mismanaged funds. This institution has existed since the founding of the Republic, but its responsibilities and structure have evolved significantly, implying the current agency is a convergence of modern and vintage legislation. As a very new organization (founded in January, 2009 but with a previous similar office, called “Dirección de Responsabilidad Patrimonial” that exists since 1989), it seems necessary to focus efforts on improvement, excellence, and accountability, in order to fulfill the legislative objectives that led to the form of Panama’s Constitution in 2004 and creation of the new Tribunal de Cuentas. Tribunal de Cuentas’s vision is to be a transparent, independent and impartial Court, exercising the jurisdiction efficiently, with integrity, safeguarding public funds against irregularities. On the other hand, the mission of Tribunal de Cuentas is to have jurisdiction throughout the Republic and decide objectively, with strict abidance of relevant legal provisions, on the responsibility that applies to officers and employees for mismanagement of funds. (Law 67, November 14th, 2008). This report is divided in three sections: first, a brief introduction of the historical background, legal framework, structure and legal procedures of Tribunal de Cuentas. Then, a second section with a proposal of a strategic evaluation plan for Magistrate Álvaro Visuetti Zevallos’; team, which wishes to excel in the efficiency of judicial decision-making procedure. And finally, to perform a management analysis with stakeholder points of view and focusing in maximizing capacity to effectively recover Government money, rapidly and according Panamanian law. The general objective of this report is to propose a strategic-evaluation plan to Tribunal de Cuentas de Panamá, specifically Magistrate Álvaro Visuetti’s team, in order to improve the organization’s internal efficiency. The specific objectives are:  Introducing general aspects of Tribunal de Cuentas  Determine laws, regulations and internal norms, applicable to Tribunal de Cuentas improvement  Present a strategic-evaluation plan for Tribunal de Cuentas, specifically Magistrate Alvaro Visuetti’s team