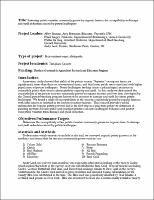 A previous study showed that yields of the potato variety “Superior” on organic farms are significantly lower than those on conventional farms, and that lower yields were correlated with higher populations of potato leafhopper. Potato leafhopper feeding causes a physiological response in susceptible plants that reduces photosynthetic capacity and yield. In this study we determined the susceptibility of ten potato varieties commonly grown by organic farmers and two lines developed by the Cornell potato breeding program known to be resistant to damage and yield loss from potato leafhopper. We found a range of susceptibilities in the varieties commonly grown by organic farmers, with some nearly as resistant as the known resistant varieties. This research provides useful information for organic potato growers and is the first step in a long-term project to determine if planting mixtures of susceptible and resistant potatoes can alter leafhopper behavior and protect susceptible varieties from damage and yield reduction.