Multi State Cucurbit Systems Study: Three Years of Research and What We Found 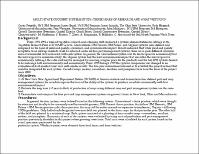 From 1992-1994 a team of vegetable research and extension staff conducted a systems demonstration for cabbage at the Vegetable Research Farm at NYSAES Geneva. Conventional, IPM Present, IPM Future, and Organic systems were defined and compared on the basis of yield and quality, economics, and environmental impact. Results indicated that while yield and quality acceptable to all cabbage markets could be achieved under all four pest management systems, there were quite different economic and environmental costs associated with each system. In general, the Conventional system was the least expensive economically but the most expensive environmentally, the Organic system had the least environmental impact but was often the most expensive economically (although the extra cost may be recouped by receiving a higher price for the product), and the two IPM systems tended to be midrange both environmentally and economically. From 1995 through 1999 the systems comparison was changed to an evaluation of fresh market sweet corn with similar results. The five-year commitment allowed us to establish the project on land that could be designated for each system. Cucurbit crops, melons, cucumbers, zucchini, and pumpkins have been the focus of the project since 2000.