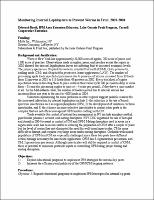 Western New York has approximately 28,000 acres of apples, 700 acres of pears, and 1200 acres of peaches. Observations made in apples, pears, and peaches across the region in 2002 showed that internal lepidopteran larvae are infesting fruit at increased economic levels. The primary species are Grapholitha molesta, oriental fruit moth (OFM), Cydia pomonella, codling moth (CM), and Grapholitha prunivora, lesser appleworm (LAW). The number of processing apple loads rejected at processors due to presence of worms increased from 30 loads from 12 growers in 2001 to 113 loads from 48 growers in 2002. Every truckload of apples rejected as canners diverting them to juice reduced their value by $1500 per load (a drop in value from ~ 8 cents for processing apples to juice at ~ 4 cents per pound), if they have a juice market at all. In the Mid-Atlantic state, the number of loads rejected due to internal worms has increased from one year to the next to >800 loads in 2004.