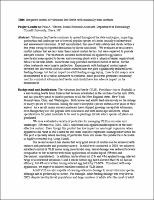 Viburnum leaf beetle continues to spread throughout the state and region, impacting production and landscape use of several popular species of shrubs (mainly cranberrybush and arrowwood viburnum). If left uncontrolled, this insect kills established shrubs within a few years owing to repeated defoliation by larvae and adults. We evaluated several newer control options that are less toxic than current control tactics, but were expected to provide adequate control. The treatments included horticultural oil applied to egg masses, insecticidal soap applied to larvae, and covering plants with a physical barrier (agricultural fabric) to exclude adults. Insecticidal soap provided excellent control of larvae, but the other treatments were largely ineffective. Experiments with biological control agents revealed that Harmonia axyridis adults released into test plots significantly reduced larval feeding damage, but had no impact on adult feeding or egg laying. Insecticidal soap is now demonstrated to be a viable alternative to synthetic, more persistent pesticides commonly used for control of viburnum leaf beetle, and should have less adverse impact on the environment.