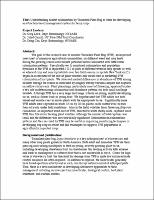 The goal of this research was to monitor Tarnished Plant Bug (TPB), an important insect pest of numerous agricultural commodities, on different weed and crop hosts during the growing season and evaluate potential factors associated with differential colonization patterns.  Specifically we 1) monitored colonization and population dynamics of the TPB in replicated 2 X 2 m plots of different weed or crop species as well as adjacent crop and noncrop habitats over two field seasons in upstate New York and 2) began an assessment of the role of plant volatiles and visual cues in mediating TPB colonization of host plants. We observed marked differences in abundance of TPB among habitats through the season as measured by roughly weekly vacuum samples and captures on yellow sticky cards. Plant phenology, particularly onset of flowering, appeared to play a key role in determining colonization and abundance patterns for both small and large habitats. Although TPB has a very large host range, it feeds on young, rapidly developing tissue, such as flower buds or young fruit. We hypothesized that TPB adults use both visual and volatile cues to locate plants with the appropriate tissue.  Significantly more TPB adults were captured on white 13 cm by 18 cm plastic cards coated with stickum than red cards under field conditions.  Also in the field, volatiles from flowering Erigeron canadensis, an important weed host of TPB,directed to white sticky cards, captured more TPB than filtered air lacking plant volatiles, although the number of total captures was small and the difference was not statistically significant. Information on colonization patterns and the cues used by TPB may be useful in improving monitoring techniques or developing trap crop or attract and kill techniques to suppress TPB populations in agriculturally important crops.