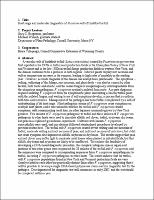 A vascular wilt of birdsfoot trefoil (Lotus corniculatus) caused by Fusarium oxysporum was first reported in the 1970s in trefoil seed production fields in the Champlain Valley of New York and Vermont and in the late 1980s in trefoil forage production fields in western New York, and the disease continues to be a problem in both regions. Infected plants display root necrosis and wilt as temperatures increase in the summer, leading to high rates of mortality in the seeding year. However, accurate diagnosis of the disease has always been problematic. The symptoms – wilting, yellowing of the foliage, root necrosis, and plant death – can also be caused by other factors, both biotic and abiotic, and the causal fungus is morphologically indistinguishable from the ubiquitous nonpathogenic F. oxysporum routinely isolated from roots. Accurate diagnosis requires isolating F. oxysporum from the symptomatic plant, inoculating a healthy trefoil plant with the isolated fungus, and waiting to see if wilt symptoms develop, a process that is costly in both time and resources. Management of the pathogen has been further complicated by a lack of understanding of its host range. Most pathogenic strains of F. oxysporum cause symptoms on multiple host plants, and it was unknown whether the trefoil-wilt F. oxysporum caused symptoms, with corresponding yield loss, on other legumes commonly grown by New York growers. Five isolates of F. oxysporum pathogenic to trefoil and three isolates of F. oxysporumpathogenic to other hosts were used to inoculate alfalfa, red clover, trefoil, soybeans, dry beans, and peas in a replicated greenhouse experiment. Cultivars with known F. oxysporum susceptibility were used, and inoculations followed standardized procedures developed by previous researchers. The trefoil-wilt F. oxysporum caused severe wilting and root necrosis of trefoil, moderate wilting and root necrosis of peas, and mild root necrosis of red clover, but it did not cause symptom development on alfalfa, soybeans or dry beans. The results suggest that peas and red clover may suffer light to moderate yield losses when planted in infested fields, but that alfalfa, dry beans and soybeans are likely to be unaffected. To evaluate the feasibility of developing a DNA-based diagnostic procedure, the complete intergenic spacer region and portions of two other genes were sequenced for 28 isolates of the trefoil-wilt F. oxysporum, and the sequences were compared to corresponding sequences from F. oxysporum nonpathogenic to trefoil, including F. oxysporum pathogenic to other hosts. The results indicate that the trefoil-wilt F. oxysporum populations found in New York and Vermont production fields are very closely related to each other but genetically distinct from other F. oxysporum, suggesting that it will be possible to develop a single DNA-based polymerase chain reaction diagnostic test for the pathogen. Development of the diagnostic test will commence in early 2007, and the test should be completed within a year.