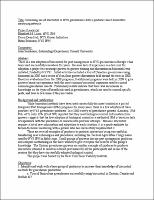 There is a low adoption of biocontrol for pest management in NYS greenhouses although it has been used successfully elsewhere for years.  Because lack of experience is a deterrent for adoption, a project to encourage grower-to-grower training and discussion on biocontrol was initiated, funded by NYFVI.  Initial activities included a tour of Canadian greenhouses using biocontrol in 2007 and a series of 6 on-farm grower discussions held around the state in 2008.  Based on evaluations from the 2008 programs, 8 additional programs were held in 2009 to give growers hands-on experience with the most common biocontrol organisms used to control common greenhouse insects.  Preliminary results indicate that there was an increase in knowledge on the types of beneficials used in greenhouses, which are used to control specific pests, and how to determine if they are viable.