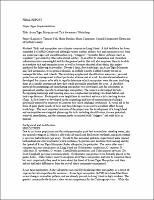 Ticks and mosquitoes are a chronic concern on Long Island.  A tick taskforce has been mandated by Suffolk County and although various entities address tick and mosquito issues there are mixed messages and misinformation (e.g., “chiggers”, “lavender fabric softener sheets as repellents”) presented by other educational entities.  In an effort to standardize and streamline information into a meaningful tool for the general public that will also empower them to be able to remediate tick and mosquito issues as well as become educated about them, this project produced the following deliverables. Twenty 1 hour, free workshops, on Asian Tiger Mosquito and Tick Awareness, were given at libraries in Suffolk County, Suffolk County owned or managed facilities, and schools. The workshop emphasized identification, awareness, personal protection and management without pesticides at home and at work. An educational wheel was developed for citizens to be able to rapidly determine which mosquitoes were the ones troubling them at a specific location and how they could personally remediate the issue.  A checklist protocol for monitoring and remediating mosquitoes was developed, one for mosquitoes in general and another specific to Asian tiger mosquitoes. The same was developed for ticks. Recognizing harborage and breeding areas was emphasized including structural deficits and landscape features.  Participants were taught how to construct and use a tick checking device (flag).  A fact sheet was developed on the expanding problem of mammalian meat allergy potentially induced by exposure to Lonestar tick saliva (alphagal syndrome).  A visual aid in the form of giant photo boards of ticks and their lifestages were used to excellent effect during workshops.  The most important outcome of the project was the development of a Long Island and metropolitan area targeted phone app for ticks including identification, disease potentials, removal, remediation, and the common myths associated with “chiggers” and with ticks in general.