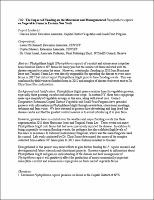 Phytophthora blight (Phytophthora capsici) of cucurbit and solanaceous crops has been found on Eastern NY farms for many year but the number of farms infected with the disease seemed to remain the same. However, catastrophic flooding in 2011 from Hurricane Irene and Tropical Storm Lee was directly responsible for spreading the disease to even more farms in 2012 that did not report Phytophthora blight prior to these flooding events. This was confirmed by field visits to flooded farms in 2012 and samples of diseased fruit were sent to Dr. Chris Smart for confirmation.