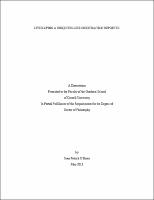 Ubiquitin-like (ubl) modification is an example of post-translational modification (PTM) that influences a number of cellular processes. Given difficulties in studying this system in its native eukaryotic context, several pathways have been reconstituted in Escherichia coli (E. coli) at varying levels of completeness. We developed the first E3-dependent SUMOylation pathway in E. coli. Because the E3 ligase increases efficiency of conjugation, we were able to lower expression of upstream elements - namely the E2 - and avoid non-physiological chain formation on target protein encountered in previously published work while maintaining high product yield. We additionally developed a ubquitination pathway in E. coli important in plant defense against bacterial colonization. In characterizing the system, we were the first to note that ubiquitination of the target protein may proceed in an E3-independent manner likely through auto-monoubiquitination involving a ubiquitin-binding domain (UBD). We believed these systems might serve as a scaffold to develop a reporter in E. coli for ubl modification of a target protein. Such a reporter would enable engineering new functionality into the pathways. For example, engineering the ubiquitin E3 ligase could achieve rapid knockdown of novel protein; small chemical inhibitors of modification could be identified; and substrates of a particular E2-E3 pair or the E2 in an E3-substrate pair could be found in a highthroughput fashion. Such advances would have merit in further study of ubl modification and in therapeutic development. We adapted both in vivo and in vitro screens/selections developed for evolving non-covalent protein-protein interactions that included split YFP, split DHFR, bacterial two-hybrid system, plasmid display with LacI and zinc finger proteins, and ribosome display. To address the shortcomings of these systems, we developed our own split Cre bacterial screen to adapt to our ubl systems. This screen made use of a two-state reporter, which provided finer resolution of the protein-protein interactions and a genetic record of those interactions. Additionally, Cre's enzymatic activity allowed for detection of infrequent dimerizing pairs. While alone it showed promise as a screen, it too failed when coupled with the ubl pathways.