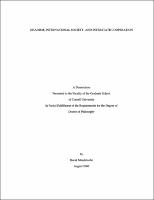 Why do states meet some terrorist threats through a collective effort, whereas at other times they respond separately, selecting from a variety of strategies? This dissertation advances an English School explanation arguing that the nature of the threat -- systemic or non-systemic -- posed by the terrorist entity accounts for the manner states respond: when a terrorist entity poses a threat only to the sovereignty and interests of specific states, countries will choose their policies from a range of available strategies. Interstate cooperation will be only one such option and, if taken, it is expected to be limited. However, when the terrorist challenge represents a threat to the existence of the state system, the members of the international society, under the leadership of its strongest powers, are expected to engage in a collective response at a level atypical of "normal politics." I test this theory using case studies, the prominent of which concerns the response to the al Qaeda-led jihadi movement. The jihadis' ideology, their attitude toward the fundamental principles and institutions of the international society, and approach to the use of weapons of mass destruction, render the global jihadi movement a threat to the international society. The nature of this threat became evident subsequent to 9/11 and led the international society, under the leadership of the American hegemony, to collectively rise to defend the state-based system. This collective action confirms and seeks to strengthen the primacy of the state in world politics. It relies on the principles of state sovereignty, states' mutual obligations, building state capacity and interstate cooperation, to fend off the jihadi threat while reinvigorating the international society. The operation of these four principles can be observed in the anti-terrorism financing regime, and the regime to deny non-state actors access to weapons of mass destruction. Together they are contributing to the creation of a worldwide infrastructure to combat the terrorist threat. This study also raises questions about state and religious logics as competing organizing principles for international relations, the role of hegemony in providing collective goods and U.S. foreign policies.