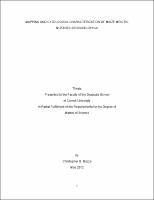 Homologous pairing during meiosis is an important process for the fidelity of recombination and chromosome segregation. The activity of homologous pairing has been linked to events that occur during the early stages of recombination, namely double strand break formation and single end invasion. The exact activities that regulate the genetic network of homologous pairing are not completely understood. The first chapter of this dissertation provides a review of research regarding homologous pairing. To understand more about the activity, a forward genetics approach was used to identify two mutants of maize, segII and dsyCS. Cytological characterization of these mutants and mapping the genetic lesion underlying each of their phenotypes comprise the second and third chapters. Combining FISH and immunolocalization studies, the segII mutant displays abnormalities beginning at the leptotene stage of meiosis, which result in reduced installation of DSB repair proteins, non-homologous pairing, reduced chiasmata, and crossovers between non-homologous chromosomes. Application of cisplatin to segII mutants to induce double strand breaks at leptotene partially rescues repair protein installation, suggesting that a lack of DSBs underlies the abnormal meiotic phenotype of segII. Analysis of the segII mutant also indicates that maize displays crossover homeostasis through its reduced single end invasion events. The number of chiasmata is disproportionally reduced when compared to the number of SEI: 26% versus 2% respectively. The dsyCS mutant was also analyzed using FISH and immunolocazliation studies. It displays a similar repair protein abnormality to segII, a more severe pairing phenotype than segII and, most notably, a high rate of anaphase bridges. A FISH probe to the telomeres reveals interchromosomal connections at diakinesis, which suggests that improper telomere repair is at least partially responsible for the bridges. dsyCS displays non-homologous crossovers, and together with segII and the previously characterized zmRad51 mutant, suggests that maize has at least three genetic paths to create nonhomologous chiasmata.