The Role Of Color, Congruency, Object Shape And Signal Strength In Bimodal Olfactory And Visual Interactions 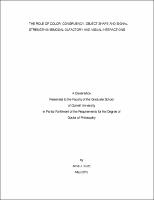 Eating is a multisensory experience, input from sight, smell, sound, taste, and texture combine to create flavor perception. Evidence for crossmodal enhancement through olfactory and visual bimodal stimulation has been found in mammals and humans in the ortbitofrontal cortex. However, the factors that result in a measurable bimodal enhancement in vision and olfaction have not been defined. A computerized methodology, involving visual stimulus presentation on a computer screen along with controlled odorant presentation through a specially designed puff-olfactometer, allowed for the psychophysical measurement of olfactory and visual crossmodal interactions. There were two parts to this research. The first set of tests presented stimuli at calculated perithreshold levels and examined two different attention tasks. Visual stimuli were black and white outlines of fruit. One task evaluated the influence visual object shape on the detection of fruit odorants in an olfactory detection threshold, the other task evaluated whether an olfactory stimulus could alter detection of a visual object. Both attention conditions were tested using congruent and incongruent stimuli. The second set of tests assessed if a color stimulus or the presentation of a color along with a shape could alter the olfactory detection threshold. Results from the first set of tests suggest no crossmodal interaction when stimuli were presented at the perithreshold level, in either the olfactory attention task or the visual attention conditions when the stimuli were congruent or incongruent. The second set of tests demonstrated presentation of the congruent color at the level of recognition, well above the perithreshold region, strongly influenced the olfactory detection threshold. To a lesser extent object shape influenced the olfactory detection threshold. The combined result from experiment 1 and experiment 2 reveals the ability of a recognizable visual stimulus to heighten olfactory detection performance. However, the overall impact of color in its ability to both increase olfactory detection performance and disrupt olfactory detection performance when presented in an incongruent condition demonstrates the ability of a visual signal to override olfactory processing mechanisms.