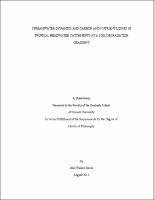 Tropical Africa is affected by intense land use change, particularly forest conversion to agricultural land. Four small headwater catchments that cover a degradation gradient ranging from intact forest to agricultural land under maize cultivation for 5, 10 and 50 years were examined. With increasing duration of cultivation, soil bulk density ([rho]b) at a depth of 0-0.1 m increased by 46%, while soil organic carbon (SOC) concentrations and total porosity decreased by 75% and 20%, respectively. The annual catchment discharge expressed as a percentage of rainfall increased from an average of 16.0% in the forest to 32.4% in the 50-year-old agricultural catchment. The average runoff ratio was 0.033 in the forest and increased gradually to 0.095 with increasing duration of cultivation. Flow-weighted stream water concentrations of different organic C fractions, all N species, total P, K and Na significantly (P<0.05) increased in streams after forest conversion and long-term cultivation. Solute concentrations increased despite the fact that soil contents decreased and total water flow increased indicating mobilization of C and N, P and K from soil with progressing cultivation. Total C and nutrient exports increased with longer cultivation (P<0.05) due to greater water discharge. Fluvial organic C and total N losses were 2% and 21% of total SOC and total N decline, respectively, in the top 0.1m over 50 years. During storm events, concentrations of DOC and K increased with larger discharge in all studied watersheds. This suggests a quick transfer of these solutes to the stream through overland flow and preferential flow through soil macropores. The Ca, Mg, Na, TDN and NO3--N concentrations did not change in the forested watershed, while their concentrations decreased with increasing discharge in the agricultural watersheds. Baseflow that is rich in Ca, Mg, and Na was diluted by the storm event runoff. Based on end-member mixing analysis (EMMA) modeling, groundwater was shown to be the dominant flowpath which was higher (P<0.05) in the forest compared to the 10and 50-year conversion watersheds. The contribution of overland flowpath compared to streamwater was significantly lower (P<0.05) in the forest and 5-year watershed than the 50-year watershed.