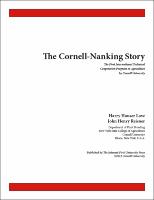 The Cornell-Nanking Story describes Cornell’s first technical cooperation program of international outreach–the pioneering effort whose legacy continues robustly today. This report, first released in 1963 by Royse P. Murphy, describes the very successful project in crop improvement that had been led by Harry Houser Love and John Henry Reisner in the 1920s. The present-day Department of Plant Breeding and Genetics of the New York State College of Agriculture and Life Sciences is one of the premier departments of Cornell University and continues this pioneering spirit as a lead participant in the New Life Sciences effort by Cornell University. The Cooperative Crop Improvement Program between Cornell University, through the Department of Plant Breeding of the New York State College of Agriculture, and the University of Nanking, through its College of Agriculture and Forestry – with financial support from the International Education Board – had its origin in a letter to Professor H. H. Love at Cornell from Dean John H. Reisner in Nanking under the date of February 4, 1924. The purpose of the program was two-fold, to organize and conduct a comprehensive crop improvement program, involving the principal food crops of the famine areas of central and northern China, (cotton was included later) and of equal importance, to train men in the principles, methods, application and organization of crop improvement. Dr. T. H. Shen characterized the outcomes: “The most significant results of the Nanking-Cornell-International Education Board Program for Crop Improvement in China were: (1) training a group of Chinese plant breeders for carrying on a national program of crop improvement; (2) developing better varieties of wheat, barley, rice, kaoliang, millet and soybeans showing increased yields from 10 to 20 percent more than the native varieties; (3) stimulating the Chinese government to establish the National Agricultural Research Bureau of the Ministry of Industry in 1931 which made great improvements in agricultural production in China up to 1949 through scientific research and agricultural extension services. Dr. H. H. Love, of Cornell, served as Advisor to the Bureau in 1931-1934.”