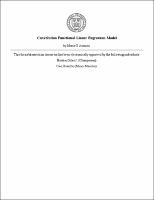 This thesis develops a new set of tools in Functional Data Analysis. A general historical functional linear model called "convolution functional linear model" is developed to handle a stationary response to the recent history of a covariate process. We argue that the dependent variable y[MICRO SIGN]i(t)is continuously related to values of covariate [ksi][MICRO SIGN]iP(w) where w \in [t - [delta][MICRO SIGN]p,t] explained by [BETA][MICRO SIGN]p(w). [BETA][MICRO SIGN]p(w) is the coefficient function of the convolution of the independent variable and give a weight to the values of [ksi][MICRO SIGN]iP(w) for the estimation of y[MICRO SIGN]i(t) as w [RIGHTWARDS ARROW] t. The coefficient of the convolution [BETA][MICRO SIGN]p(w) as well as [delta][MICRO SIGN]p are unknown and estimated by least squares and cross-validation methods. In addition, diagnostic methods are also developed with the purpose of estimating the variability of [BETA][MICRO SIGN]p(w), once [delta][MICRO SIGN]p has been estimated, and the effects that each curve sample has over model estimation or solution. In particular, the methodology of the non-overlapping block bootstrapping (NBB) was expanded to provide a solution for the distortion caused by dividing the sample data into blocks of length "l" and resample them with replacement. This method handles the discontinuity caused at the interior points where the blocks ordinarily should be connected in the block bootstrapped sample. In other words, the block bootstrapped sample becomes less rough and maintains the smoothness of the original data. In addition, the block bootstrapped resembles the autocovariance structure of the original data allowing estimating accurate confidence interval for [BETA][MICRO SIGN]p(w). The statistical methods of Cook's and Mahalanobis distance also were modified with the objective of accounting for the time structure and serial correlation of the data. This was specifically done by restricting the estimation of the covariance using the autocovariance estimates. These two methods allow identifying curve or functional data that are causing a significant effect in the solution and estimates of the model. Finally, the model was used for the estimation of the continuous trajectory of particulate matter given driving behavior variables. Estimates of the parameters and diagnostics for this particular case are provided.