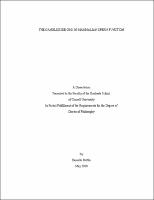 GM1 is known to influence several signaling pathways in somatic cells that are also important in sperm functional maturation, such as “capacitation” and fertilization. These pathways include tyrosine phosphorylation and exocytosis of the acrosomal vesicle (AE). I report that the ganglioside GM1 is enriched in a stable, micron-scale sub-domain in the plasma membrane overlying the acrosome of the sperm head in several species. This membrane sub-domain is conserved across several mammalian species. The domain appears to be specifically masked by seminal vesicle fluid secretions during the process of insemination. I also report that the acrosomal vesicle membrane is enriched in GM1. This enrichment may act to increase plasma membrane GM1 during point-fusion events between the acrosomal and plasma membranes. I investigated the impact of modulating the GM1 concentrations in sperm membranes. I found that exogenous GM1 stimulated an increase in intracellular calcium and accelerated tyrosine phosphorylation cascades in sperm through activation of the TrkA kinase pathway, by-passing the need for sterol efflux in this pathway. Additionally, I found that changing GM1 focal enrichments in the plasma membrane, either through the addition of exogenous GM1 or using the pentameric B subunit of cholera toxin to cross-link endogenous GM1, induced AE. The effect of GM1 clustering appeared to be mediated by the sialic acid residue of GM1 because ceramide and asialo-GM1 were unable to induce such effects. GM1 influences many calcium dependent processes in other cell types, and I hypothesized that a similar calcium-dependent process was active in sperm. AE was inhibited in a concentration-dependent manner by inhibiting calcium channel activity either with Ni2+ or store-operated calcium channels and CaV2.3 calcium channel inhibitors. Sperm lacking the CaV2.3 channel displayed impaired fertility and were unable to undergo AE in response to progesterone, zona pellucida, or GM1, despite apparently normal capacitation and membrane fusion. Together, these data suggest a model in which an increase in plasma membrane fluidity during sterol efflux, together with point fusions between the plasma membrane and acrosomal membrane, allow the clustering of endogenous GM1. This clustering then stimulates calcium influx through the CaV2.3 channel and signaling pathways necessary for mammalian fertilization.