On Coherence Effects In Magnetic And Non-Magnetic Nanoscale Conductors 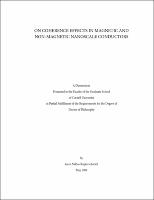 This doctoral dissertation concerns electronic, nanoscale systems exhibiting coherence effects. Two effects are considered in detail: quantum corrections to the ensemble average of the conductance of a network of quantum dots, and superconducting correlations induced in half-metals by a nearby s-wave superconductor. In Chapter 1 the common origin of these two effects is considered and the processes limiting quantum coherence are discussed. The quantum corrections to the ensemble-averaged conductance of a network of quantum dots are calculated in Chapter 2. All leading quantum corrections to the classical conductance are obtained: weak localization, which reduces the conductance and arises from coherent backscattering of electrons, as well as Altshuler-Aronov corrections, which arise from the Coulomb interaction among the electrons. Employing Random Matrix theory and diagrammatic perturbation theory, we obtain the quantum corrections not only for all magnetic fields strengths but also for all temperatures. Our results are given in terms of contact conductances and capacitances, quantities obtainable directly from experiment for gate-defined quantum dots in semiconductor heterostructures. From Chapters 3 to 5 we explore superconducting correlations in half-metals, materials in which only one spin species can propagate at the Fermi energy. We investigate two potential "triplet" Andreev reflection mechanisms, which allow superconducting correlations from an s-wave superconductor to extend into magnetic materials, and which involve the rotation of a quasiparticle's spin close to the interface. In Chapter 3 we assume a thin ferromagnetic spacer layer at the interface between the half-metal and the superconductor, whose magnetization is not collinear with that of the half-metal. We find that here "triplet" Andreev reflection is suppressed close to the Fermi energy. This is shown to be due to unitarity and particle-hole symmetry, which in the single-channel quantum limit lead to the absence of Andreev reflection at the Fermi energy. This absence leads to a suppression of an interface's subgap conductance at low bias voltage, as well as to a suppression of the magnitude of the Josephson current through long half-metallic links. Chapters 4 and 5 investigate domain walls as an alternative source of "triplet" Andreev reflection. It is shown that orientation of the domain wall with respect to the interface matters: where an interface is invariant under translations as well as half a rotation around the interface normal, the same restrictions as in the single-channel limit apply. If a domain wall is oriented parallel to the interface these invariances are retained; where the domain wall is perpendicular the invariances are broken, allowing for a finite Andreev reflection amplitude at the Fermi energy. We also find that contact geometry affects the magnitude of the Andreev reflection amplitude. If a superconductor is laterally brought into contact with a thin half-metallic film, the Andreev reflection amplitude is enhanced due to multiple reflections occurring in the thin film.