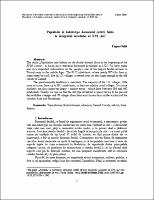 The study „Population and habitat on the feudal domain Şiria at the beginning of the XVIth century” is based on a statistical document developed in 1525. We have many and very important information on the people’s one of the largest feudal domain in Transylvania in the middle Ages. The 8152 inhabitants, where nearly 90% for them is represented by serfs, live in 121 villages scattered over an area large enough in the old county of Zarand. The predominantly landform is mountain. The majority of the 121 villages, 76% more accurate, have up to 80`s inhabitants, so they are relative small villages. Yet some localities are also somewhat larger – market towns - which have between 184 and 460 inhabitants. Finally, we can see that the old type of habitat is preserved up to the present day with few changes and 70 villages from them exist in our days on the territory of the counties Arad and Hunedoara.