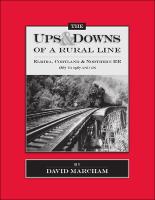 The Ups and Downs of A Rural Line

This book is both a railroad history and memoir. The author vividly reconstructs the life of the Elmira, Cortland & Northern Railroad, its predecessor lines, and successors over the one hundred years the route was in operation. He does so as someone who worked for the Lehigh Valley Railroad as a towerman at Cortland Junction and five other Lehigh Valley interlocking towers and as a rail historian who has gathered stories, photos, and artifacts from men who worked this line and fellow historians across several states. I am his brother, a retired journalist, and now book editor. As noted in his earlier rail memoir, Lehigh Valley Memories, A Tour of the Lehigh Valley Railroad in New York’s Finger Lakes Region, 1941--1959, David and I were bitten early by the railroad bug, while on summer vacation on the west shore of Cayuga Lake, near Ithaca, New York, traveling by gas-electric motor to a farm roominghouse and watching across the lake where the Lehigh switched cars and we tried to figure out the track layout. David has since spent a lifetime in transportation, as a railfan, towerman and station agent for the Lehigh while a Cornell University student, as a lieutenant in the U.S. Army Transportation Corps, and with the Chesapeake & Ohio, Washington & Old Dominion, New York Central railroads, and Massachusetts Bay Transit Authority before retirement from a wide variety of management positions in operating and finance departments. He is the editorial "we" and the "young telegrapher-station agent" who speaks in these pages. David has undertaken to recall how the Elmira, Cortland & Northern Railroad came into being as a hastily crafted rural line, and its continued existence under the Lehigh Valley, Conrail, and other owners. The book follows the arc of a railroad, through the coming of competition from other lines, the automobile and truck, canal and lake boats, and airlines. Many of the photographs are David Marcham’s. He includes a locomotive roster, station list, maps, timetables, more than 150 illustrations, a bibliography, acknowledgements, a list of illustration sources, and an index.