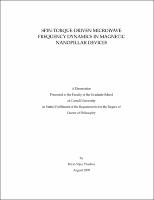 In a magnetic multilayer, spin-transfer torque from a spin-polarized current can excite magnetic layers into steady-state precessional oscillations. In this dissertation, the main theme of our work has been the study of microwave signals produced by spin-torque-driven magnetization dynamics excited by direct or radio-frequency currents in magnetic multilayer spin-valve devices with a nanopillar geometry. In the first part of our work, we have studied the frequency linewidths of the precessional oscillations excited by direct currents in the magnetic layers as a function of the in-plane magnetic field angle and temperature. The motivation of this work was to understand the important mechanisms contributing to the linewidths with a view to optimizing the coherence of the oscillations. We have found strong variations in the frequency linewidth of the signals, with a decrease by more than a factor of 20 as the field is rotated away from the magnetic easy axis to the in-plane hard axis. Based on micromagnetic simulations, we have identified these variations as due to a transition from spatially incoherent to coherent precession. As a function of temperature, our experimental linewidths can be explained by a combination of amplitude and phase fluctuations and thermally-activated hopping between different dynamical modes. At lower temperatures, the linewidths are affected more strongly by amplitude and phase fluctuations. At higher temperatures, the linewidths increase more rapidly due to thermallyactivated hopping between different dynamical modes. In the second part of our work, we have studied spin-torque effects on the exchange-bias of antiferromagnet / ferromagnet bilayers by studying the amplitude of the spin-torque-driven resonant motion of an exchange-biased magnetic layer in response to a radio-frequency current. The motivation of this work was to investigate spin-torque effects in antiferromagnets. We have fabricated magnetic nanopillar devices in which the free magnetic layer is exchange-biased to an antiferromagnet, and which allow a direct measurement of the magnitude of the exchange bias and its current dependence. Using spin-torque-driven ferromagnetic resonance (ST-FMR) measurements, we have observed strong variations in the precession frequency as a function of the current, indicating that the exchange-bias is current-dependent. We have also verified that the effective damping of an exchange-biased nanomagnet is higher than for an unpinned nanomagnet.